Use a gun in the kitche? 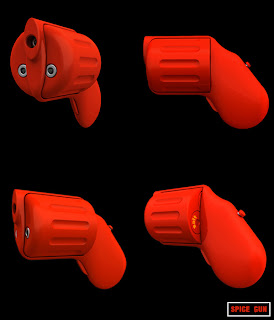 I'm a big fan of spices and seasonings: they can really change a dish from bland to amazing. I like to have fun with my spices, though, and I think the Spice Gun is just the ticket. A Chinese designer, Zhu Fei, came up with the idea of the Spice Gun: instead of shaking out your preferred spice, this gadget 'shoots' it out, using compressed air to push seasonings out of the gun. 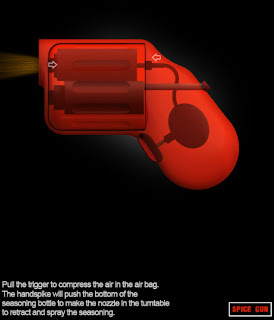 There are three barrels in the Spice Gun, allowing you to load it up with the spices of your choice--you can change up your ammo by spinning the barrel. The gun only shoots dried spices, and it looks as if ground herbs are easier to load. 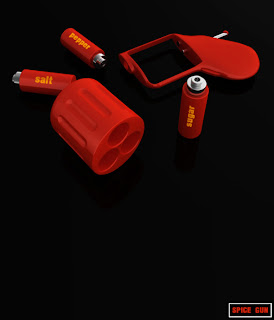 While the Spice Gun was created as a fun twist on the seasoning shaker, I've already thought of a few practical applications. When I'm cooking my Thanksgiving turkey, for instance, I like to put some spice on the inside of the bird. I usually wind up using my hands because I'm worried about getting my spice shakers dirty. However, if I could just shoot the spices into the cavity, I don't think there would be near as much mess.
发帖者 Arthur Eric 时间： 1:13 AM