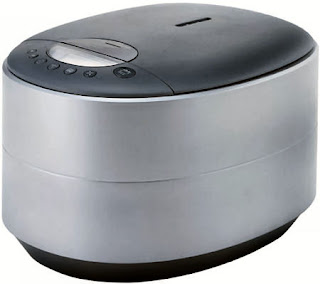 I like mind readers. I frequently expect my wife and children to know exactly what I'm thinking and do what I want. And my appliances? Well, more than once, I've been known to shout at the microwave or the bread machine.

Turns out that there are a few appliances that--if not mind readers--at least try to think. A fuzzy logic rice cooker, for example, works much like a real cook. The machine uses its senses to observe the rice as it cooks, adjusting for it type and volume, and intervene--by changing the temperature--when necessary.
These rice cookers cost more than the simple on/off versions ($200 versus $50 or less), but they deliver consistently fantastic rice. Also, a fuzzy logic rice cooker has many uses. In addition to producing perfectly cooked rice of any type and texture, and similar foods such as porridge and oatmeal, a fuzzy logic rice cooker can also be used to make all kinds of dishes.
Zojirushi makes some great rice cookers, including the Zutto Neuro Fuzzy rice cooker and warmer. It can cook up to 5.5 cups of rice in its spherical inner cooking pan. The cooker's heating system allows the heat to distribute evenly and cook the rice perfectly. You can set the cooker for white/sushi rice, porridge, and mixed rice. Other features include automatic keep warm, LCD display, clock and timer function, and a detachable inner lid.