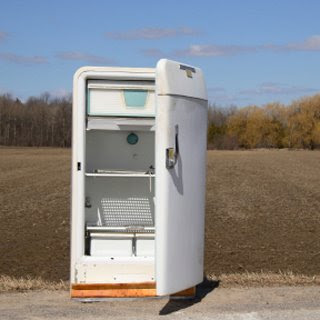 How green is your kitchen? If you’re part of “small segment” of the eco-conscious, you don’t have a fridge.
Here in New York, it’s not uncommon to help the environment by burning less natural gas; you eat out and use your oven as it was meant to be used in tiny apartments – to store sweaters. But some folks – apparently, ones who give up readily cold beer and live in chilly climes where they can store their mayo on the porch – have gone the extra mile by disconnecting their refrigerators.
“It seems wasteful to me to use even an Energy Star-rated fridge,” one satisfied, fridge-less woman, Rachel Muston of Ottawa, tells the newspaper, “because I’m getting along fine without one.”
It's not a radical idea to want to reduce the carbon footprint of your kitchen – alt-energy companies are building solar refrigerators, and even Einstein and fellow physicist Leo Szilard patented three prototypes that operated without moving parts. But is it really necessary to junk your icebox in the process?
Consider this: refrigerators use the least amount of energy of all common household technologies, according to data released last month by the Department of Energy. Home heating uses the most, followed by, as a group, lights and appliances including dishwashers, clothes washers and dryers, computers and TVs. Water heaters make up the third largest share of household energy, followed by air conditioners. So exactly how many people in the U.S. have actually sworn off refrigeration? Deanna Duke of Seattle, who runs an eco blog called The Crunchy Chicken where visitors have debated the practice, tells ScientificAmerican.com that she's not aware of a formal stat. But of the 50,000 unique visitors to her site, she estimates that roughly 11 have disconnected their fridges. Another eight, she says, "sounded willing."
Duke published a blog post last month listing reasons why forsaking the fridge isn't worth it: additional tailpipe emissions from those extra supermarket runs, food that goes bad before you eat it, and the extra packaging from buying more frequent, smaller quantities. Her online adversary, a blogger known as "Greenpa," has rebuttals, among them, that city dwellers can easily pick up food on foot, and that many foods you think require refrigeration (such as butter, eggs and cheese) don't.
Other greenies aren’t convinced that life without a fridge makes sense. “It’s silly not to have one,” Texas mom Gretchen Willis told the Times, “considering what the alternative is: drinking up a gallon of milk in one day so it doesn’t spoil.”