Did you hear about electric knife before? 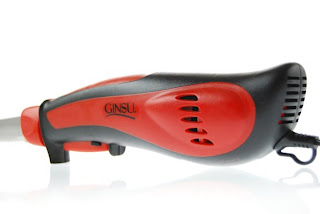 The electric knife is the unsung hero of the kitchen. The food processor and stand mixer take all of the glory for their multitasking capabilities, while the oven and the refrigerator get the credit for being the foundation of the kitchen. However, it is the seemingly small things that really make the kitchen go when it comes time to shine. The electric knife is a surprisingly simple creation I used to think was overrated, but this being the time of year for turkey, I recently rediscovered the ease of carving via electricity.
But wait, there's more!
Taking the electric knife and extending its usefulness out of the kitchen, this Ginsu offering is designed with the fisherman in mind. Two sets of double serrated stainless steel blades are included, for both freshwater and saltwater use, and the knife includes a 12 Volt plug and a 100 Volt converter. The Ginsu Outdoors Electric Fillet Knife features ergonomic contoured housing and is lightweight and attractive.
Nothing will ever replace a nice, sharp knife for control and ease of use, but electric knives might be worth a second look. In addition to quick and easy slicing and filleting, the electric knife could be an invaluable kitchen tool for many people. Taking the electricity out of the kitchen and into the great outdoors only furthers the possibilities for the often underappreciated electric knife.