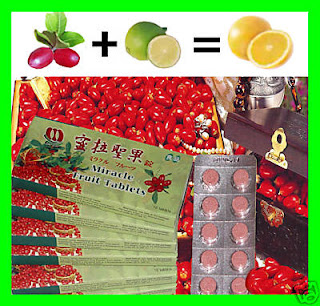 If you frequent farmers' markets in the summer, then you know the stark contrast between produce you can find in the heat of July and that found in winter. Fruits that are normally sweet take on a sour, bitter, or dull flavor that doesn't improve until the weather does.
Some of us are trained, at this point, to eat with the seasons for the freshest flavors. That being said, there's nothing worse than biting into a piece of fruit and being rewarded with a sour taste that feels something like getting punched in the taste buds. Apparently, the way around this kind of unpleasantness for the palate is through these Miracle fruit tablets.
According to the manufacturers, these "miracle berries" cause a protein reaction in your mouth that causes things that would normally taste bitter or sour to taste sweet. According to a certain group of taste-testers at ThinkGeek, oranges that were already sweet tasted like "they were plucked from the Garden of Eden."
One tablet lasts for an hour, but even just a half tablet is enough to sweet even the tartest foods. You can pick up a box of 10 tablets for $20 from ThinkGeek.