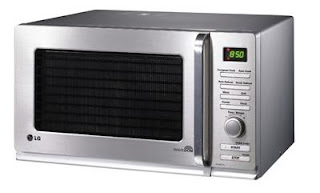 Touch screen has made its way from cell phones and computers into the kitchen via the control panels of many of the modern ovens and ranges. Though not the first of its kind, the LG WaveDom is a beautiful example of a touch screen on a convection microwave oven, and it boasts several other fancy features as well.
The microwave is large (30 liters) in a round cavity configuration, and has a large turntable that can hold meals big enough to justify using one of the four auto roast programs that come included in it. In addition to roasting, it can automatically cook, reheat, and defrost with four separate settings for each. Quick Start and Quick Defrost can be used if the thought of preprogramming your microwave oven makes your head spin.
A cool bonus is the Keep Warming function, so you can answer your phone call without worrying that your leftovers are going to have to be heated a third time.
The touch-screen exterior is pretty too, made out of stainless steel and black glass. It has a dial control and VFD display, and it's available in white, black, or silver.
发帖者 Arthur Eric 时间： 12:11 AM