A electric pressure cooker is your friend 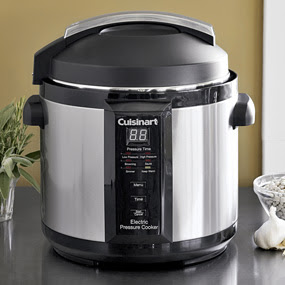 When I was first venturing into the kitchen, one appliance in particular scared me: the pressure cooker. Even the name--while being an accurate descriptor--conjured up images of tortured carrots and screaming potatoes. I was afraid to go near the thing, let alone use it for some innocent task like boiling water. Eventually however, I recovered from my appliance paranoia and now can operate all manner of kitchen appliance and gadget with no hesitation. Still, I get the occasional shiver when pulling out the trusty pressure cooker. While the older pressure cookers resemble medieval torture devices, this shiny new Electric Pressure Cooker from Cuisinart looks positively harmless.
Operating on the same principal as its ancient cousins, the electric version offers precision control and timing features. Besides low- and high-pressure options, settings include browning, simmer, and saut?. An LED timer counts down remaining cooking time. When done, the lock will not open until the pressure is released and the unit switches over to an automatic warming mode. The cooking pot is dishwasher safe and has a 6-quart capacity.
Pressure cookers a classic way to speed up cooking time and produce healthier results. They are simple to operate, as expanding steam does all of the work. Just put your raw veggies and meat inside, add water, and fire it up. However, it's not the type of thing you can set and forget; it is best to keep one eye always on those sneaky pressure cookers, even if the modern ones aren't as menacing as past versions.
发帖者 Arthur Eric 时间： 11:17 PM