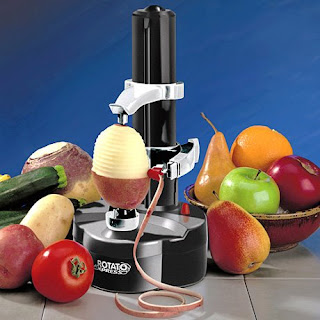 Whoever came up with this idea must really hate potato skins. To create a device so committed to the removal of skins from potatoes, one must truly hold a disdain for them. Perhaps that person would also be a fan of this dedicated apple peeler.

As a fan of a more rustic style of cooking, I personally opt to leave the potatoes in their jackets when boiling up a batch of mashed. It's not just the fact that I don't have to deal with the dreaded potato peeler, but the flavor and texture of potato skins is something I feel adds to the overall dish. All that being said, there are times when potatoes in their skins just won't do. For those who really, really hate potato skins, this device may be just for you.

Operated by either the included AC adapter or by 4 AA batteries from your stash, the Rotato Express works by spinning the inserted potato around a stationary blade. The skin is removed in an even, consistent fashion, so I suppose this gizmo actually does more than one thing. By taking the peel and deep-frying it, you could have yourself a tasty (and crunchy) treat to eat with your mashed potatoes.
发帖者 Arthur Eric 时间： 11:08 PM