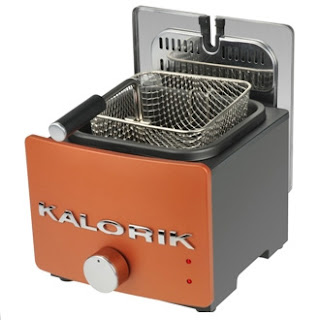 As a fan of the breakfast sandwich, this product photo jumped out at me, not only because this toaster looks like something form 1950's futurism, but also because of the delicious looking croissant perched atop, seemingly just waiting for an egg, cheese, and bacon to come along.
As it turns out, the Kalorik Aztec Toaster isn't some new fangled breakfast machine (aw, shucks), but instead appears to be a pretty standard toaster, albeit with a pretty face. The grate upon which that croissant rests turns out to be a "bun warming rack", which in turn, rests over the heating elements. If it appears to you, as it first did to me, that the rack actually lowers somehow, well, it doesn't; it's just a place to rest your breadstuff on while you warm it up. It can, however, be used as a handy toast rack for freshly toasted slices, which would be quite efficient in keeping moisture from collecting underneath your toast. When not in use, the bun warming rack hangs from two hooks provided on the backside of the toaster.
The big chrome central knob is the browning control for the toaster, while the smaller buttons on either side are for specific settings including: reheat, defrost, bagel, and cancel. The two extra-wide slots accommodate thick-sliced bread and bagels, and an alert sounds when your toast is ready. Now just apply eggs, bacon and cheese, and enjoy.